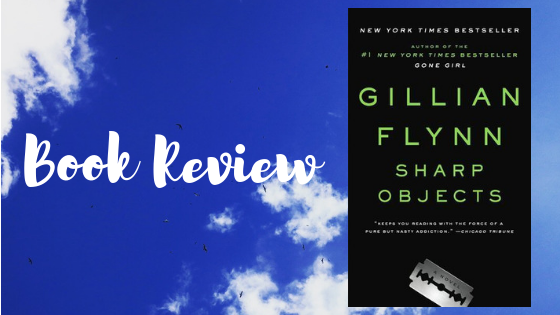 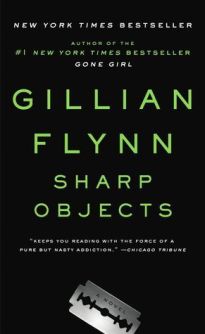 A dark, disturbing, internal-demon-producing novel by the infamous Gillian Flynn. Sharp Objects is the Gone Girl author’s debut monster of a title and is, in every possibly imaginable way, a creepy, cold, and cloying work in and of itself. It took me about two weeks of self-reflection to really muster up the courage to sit down and write an actual review of the thriller.

The story opens with the release of the beautiful, middle aged, second- rate reporter based in Chicago, Camille Preaker, from a brief detainment in a psychiatric hospital. She barely has her sh** back together when she is sent to her small, forgettable hometown in Missouri to cover the murder of two young girls whose corpse have distinct similarities, leading the town to believe the murder was committed by the same sick individual with a fetish for pulling out young girls’ teeth.

Still devastated by the death of her younger sister Marian, when she was 13 years old, Camille is less than enthusiastic to return to the town that she believes ruined her both internally and externally, as reflected by the sets of myriad words she is in the habit of carving into her skin. Now a recovering cutter, these words linger in Camille’s skin and throughout the novel, remind her of the misery and trauma that she has experienced and from which she barely managed to escape.

Now being sent back to her toxic family home for work, Camille feels like she is literally walking right back into the clutches of the environment that damaged her so much. With a hypochondriac, mentally-impaired mother, a beautiful, younger half-sister named Amma whose grip on the town is anything but innocent, and a set of ill-equipped police, Camille, despite the ironic and hypnotizing events that seem to be targeted directly at her, appears to be the only one capable, and for that matter, left to untangle the truth burrowed beneath the murders.

This plot-driven novel is filled with extremely flawed characters that are hard to empathize with and even like. Each of the dysfunctional figures with a hand, in one way or another, in the murder or uncovering the murder have a gruesome set of addictions that result in self-destruction, externally-directed cruelty, all with psychologically tormenting repercussions. Camille has a promiscuous fascination with sharp objects and the new words she can cut into the last empty spaces on her scarred body. Her mother disguises her ulterior motives with foggy medicines that she believe hold a cure for some unnamable illness that only she can detect. Amma is quite the delirious chameleon who appears an angel in the eyes of her mother, but a drugged out whore to everyone else in the town who is sane enough to see right through the preteen beauty.

Sharp Objects is the kind of novel that provokes the reader into constant questioning and pondering upon the motives of the cast of characters, none of which appear innocent, and safe from themselves as well as others. In this small-America town where sweet tea on the veranda, and laying about in silk night dresses is the norm, if not the only pass time of the delicate females, readers are left deliberating the legend that this prototype of American culture protects and whether or not it truly exists, or was always a utopian myth. At the same time repulsive and lethally riveting, Sharp Objects is a graphic, twisted, and clearly disturbing read that taps into sensitive subjects whose explicit handling of topics leaves everything exposed, and nothing safe.