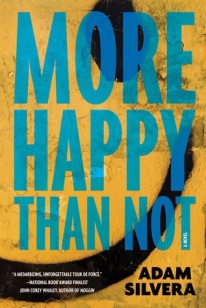 Title: More Happy Than Not

More Happy Than Not is a whirlwind of tragedy, misfortune, self-discovery, and an utmost pursuit of happiness in a reality where happiness is taken for granted and lost more easily than it is gained. This is a book of struggles between race, sexuality as well as oneself. It’s everything that I could ever hope for in a modern YA. This is a page turner that goes back in time recreating the demons of a teenager’s past and his determination to erase it all, even if it means losing more of himself than just his past.

Part Eternal Sunshine of the Spotless Mind, part Aristotle and Dante Discover the Secrets of the Universe, Adam Silvera’s extraordinary debut confronts race, class, and sexuality during one charged near-future summer in the Bronx.

Sixteen-year-old Aaron Soto is struggling to find happiness after a family tragedy leaves him reeling. He’s slowly remembering what happiness might feel like this summer with the support of his girlfriend Genevieve, but it’s his new best friend, Thomas, who really gets Aaron to open up about his past and confront his future.

As Thomas and Aaron get closer, Aaron discovers things about himself that threaten to shatter his newfound contentment. A revolutionary memory-alteration procedure, courtesy of the Leteo Institute, might be the way to straighten himself out. But what if it means forgetting who he truly is?

Aaron Soto is a high schooler growing up on the rougher side of the Bronx, amongst violence and drugs, and friends that get him caught between the two. He struggles with his sexuality throughout the entire novel, going beyond all obstacles, even science to erase this part of himself. And what’s worse, he feels his father’s recent suicide is his doing. He is not only trying to move on from the death of his father but also trying to become someone who is simply not him; not in his cards.

Aaron’s sadness is a constant reminder to him of how hard happiness is to achieve. He carries around a history and does not know how to cope or be happy with who he is. He hides himself from his friends, his family, even himself by undergoing an experimental procedure. If he can get rid of one memory then perhaps everything will fall back into place.

He walks around with a smiley face scar on his wrist that he scraped onto his skin as a final plea for help. Unlike his father, he does not give up on hope, home or happiness. His character exhibits strength and determination. Struggle and pain marks every stop in Aaron’s history, but, despite it all he still strives to be more happy than not, no matter what the end result may be.

Throughout much of the novel Aaron seems to be moving forward with the help of his girlfriend, Genevieve. But this bliss is short lived. Repression results in the renewal of pain and emergence of memories, evermore painful than before. This is exactly what happens to Aaron. His encounter and eventual close friendship with a boy from the next neighborhood, Brendan, or should we call him the “boy with no direction,” reminds him of who he was a lifetime ago. This relationship not only reminds Aaron of his sexuality but creates a domino affect. The tucked away memories resurface, causing Aaron and his family pain and tragedy, when what they were originally seeking a blank new page; a new beginning.

The story captivated me with its confrontation of real issues of the day causing me to wonder about our society and the acceptance of outsiders and just “difference” in a place where all is tight and straight, with little room for something “bizarre.” More Happy Than Not is a realistic novel of Silvera, painting an evocative portrait of sexuality and what it means to be more happy than not, a noteworthy 5 star read to set me up for more from this author.

5 thoughts on “Review: More Happy Than Not”